My career story: “We quit the magic circle to found our own tech start-up” 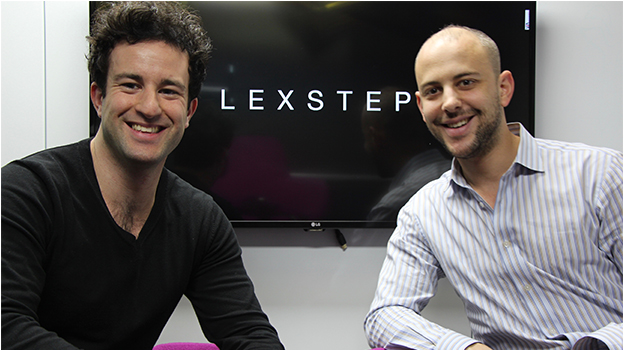 Michael Hagai and Alex Isaacs trained and practised at magic circle firms but left to set up LexStep.com, a tech start-up that seeks to “put an end to annoying cold-calls from middlemen recruitment agencies offering irrelevant positions” by allowing top-tier lawyers to transparently explore relevant career opportunities and connect with the best law firms on a single online platform.

What’s your background and how did you meet?

Alex: We played football together at College of Law – second XI Mighty Ducks, I’ve still got the kit. We stayed in touch after that. I trained at Linklaters and qualified into the disputes team.

Michael: I trained at Allen & Overy in London and Singapore. I really loved it, and qualified into corporate M&A. The particular partner I sat with had a leaning towards TMT clients and I got to work on some really exciting tech deals, such as advising a California-based company on a potential acquisition in the UK.

The reason I chose that seat as a trainee and eventually qualified there was because I have always been really interested in tech. A&O is based right at the edge of the City near Shoreditch, so I went to lots of techy networking events round there, and bumped into Alex a couple of times. At the same time I was on A&O’s new ideas and innovations committee, a forum for developing new ideas for the business that could make it more efficient.

How did the idea for LexStep first come about?

Alex: Michael and I often joked about the cold calls that lawyers get from headhunters. A good example is a friend of mine in Dubai who was called up from someone giving him a ten-minute pitch about a great opportunity. It turned out the opportunity was at the law firm he was currently at.

There was a real turning point from when we were having a laugh about cold calls, to then deciding to sit down with our friends and ask about their experiences.

Michael: It’s not just the cold calls – there’s the numerous InMails you receive. For BD purposes I used LinkedIn to connect with my clients, and put a lot of information on my profile, but I used to get a barrage of InMails offering me, sometimes relevant positions, sometimes ridiculous ones. I still get emails from a particular recruiter addressed to ‘Fiona’, offering me completely irrelevant positions.

Alex: We started to think about it seriously when Michael was on secondment at a company and was tasked with bringing someone on board. Michael was dealing with some recruitment agencies from an employer perspective, and we started to realise that it wasn’t just lawyers who might not be receiving the best service, but law firms as well.

Michael: I was working on a huge global transaction and it got very busy very quickly. We needed more resources so there was a budget set aside to bring in new people to my team. The company had a particular preferred recruitment agency, so I was told to contact them. I had a 30-minute discussion with a nice representative of this particular agency, who seemed to understand that I needed someone with a transactional background who could hit the ground running, with previous experience of big corporate deals, restructuring deals or even banking deals – but please, some transactional experience at a pretty good level.

A couple of days went past, then I got an email with three or four CVs attached – none of them were relevant whatsoever. I called the agency and said, ‘Maybe I didn’t explain it properly, but we really need someone with transactional experience – we can have a paralegal or an NQ but please, relevant experience. We’re dying here, the company stands to lose millions of pounds.’

I finally got sent a CV of someone who looked fantastic. We invited them for an interview – and then it went silent. I called, emailed, days went past and eventually I got a call back. The agency was really sorry but actually that person had taken a job at Goldman Sachs and wasn’t actually interested in us in the first place. It turned out the person didn’t know their CV had even been sent to us.

Have you any advice for dealing with recruiters?

Michael: Absolutely speak to whoever you want in the market, and use whatever resources are out there, but do not send your CV to anyone if you don’t have to. And if you do, give them written instructions not to send your CV anywhere without your explicit permission.

Alex: There is absolutely no need to send your CV to anyone. Obviously there are really good recruitment agents out there, but some of our friends had some quite shocking experiences. We’ve had friends who had their information sent round firms without their permission at all. That happens quite a lot. You’ll get cold calls where they talk about opportunities that don’t actually exist – someone will try to hustle a move out of nothing. You’ll put your CV forward and never hear back. It all feels really mysterious process. We’re trying to make the process less mysterious and more informal.

How did you go about setting yourselves up?

Alex: We were talking to so many people, both lawyers and people working in HR. We got excited that could do something that would bring some efficiencies and transparency to an industry that seems to hinge on outdated sales practices. We also felt we were the right people to do it, given our backgrounds.

Michael: We got a recommendation from a friend for developers. I was still very much at A&O, so we had conference calls with developers and met up in the evening and called each other on the way to work. We got very excited, given the feedback we got from friends and lawyers, that this was really something they would really use. We built a product for ourselves. That’s the key.

We built a minimum viable product and tested it on our friends. I collared a few of my colleagues – we went into their offices in the evenings and begged them for five minutes of their time to test it out, and slowly built this platform.

User experience was our main concern. If you read any start-up literature, everyone says you might have a great idea, you might even have a great product, but the vast majority of success is down to execution and I completely subscribe to that view in hindsight.

How hard was making the decision to quit your jobs? Have you any advice for someone thinking of doing something similar?

Alex: I was enjoying working at Linklaters and was involved in some very high profile matters. However, having built and sold a small online business whilst at university, I just had a real bug to try and do something a bit more entrepreneurial and innovative again that I just couldn’t ignore.

Michael: The work ethic we’ve gained from our magic circle experience is something we need to thank the partners for. That’s become really useful in order for LexStep to be successful because it’s not something you can do on the side, I realised it would have to be full-time. We really believe in the idea and that’s why I took the plunge to leave a secure career at A&O, where I was doing well. It was a very, very difficult decision. I was 2.5 PQE and it really was one of the hardest decisions I ever had to take.

Alex: You’re taking a jump into the unknown, and lawyers are very risk averse. It’s a psychological thing more than anything else, and what helped me was asking: what’s the worst possible scenario? Well, if I were to leave and try something else, the worst thing that will happen is that it doesn’t work out. I’ll have spent a year trying, so I’m not going to regret not doing something I thought might be cool, and I’ll hopefully be able to go and get another job based on the experience I’ve already built up. When you look at the worst-case scenario, then things don’t really seem that bad.

What about advice on the tech side of things?

Michael: I’ve got a lot of friends who are also doing start-uppy stuff so that’s how I got interested in the scene in London. A big mistake I see a lot is that people will spend six or 12 months, either building something themselves or paying a development team a lot of money to build the perfect product, without talking to any of their potential users. Then they launch whatever it may be and there’s no interest in it, and they’ve spent a lot of time and a lot of money and it’s all a waste.

Alex: Definitely talk to people as soon as possible, and on the tech side specifically don’t start building it until you think you are on to a goer. We started with wire frames of what how LexStep might look on PowerPoint. You could see how it would work, but it’s inexpensive. We made a lot of changes before we started building the site. So essentially, the platform has been built by top tier lawyers, because we’ve spoken to them and they had input into the process.

Michael: Lawyers especially, are quite secretive and confidential and are scared about talking about their potential ideas. It’s really important to speak about your ideas as soon as possible: the second we decided to take it vaguely seriously we started asking what our friends thought of the concept. You learn so much and very quickly find out if your idea is a complete non-starter.

Alex: When you keep something to yourself I guess it might be because you’re scared of someone stealing your idea, but what are the chances of a friend dropping their entire life to try and steal your concept?