The paralegal remains one of the most ill-defined jobs in the legal profession. There is no set definition to the role, with some paralegals working as highly experienced specialists within one practice area and others engaged in high volume, low value work or non-legal dogsbody tasks.

There is still little oversight of paralegals as a body. The first attempt at regulating them came in 2015, when a Professional Paralegal Register but as yet they cover a small number of the 200,000 that the National Association of Licensed Paralegals (NALP) estimates there are nationwide.

Lawyer 2B’s paralegal health check survey is the first snapshot of the state of the market. We had over 1,000 responses and many paralegals went into detail about their working lives, their concerns and their opinions on paralegal life. 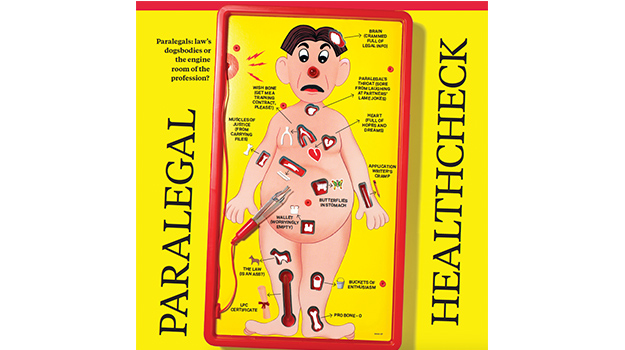 Our survey shows that while 63 per cent of trainees are female, in the ranks of paralegals they are even more dominant. Some 69 per cent of those surveyed were women. 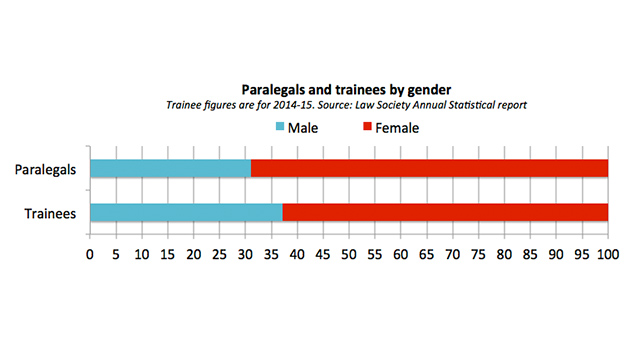 The results show that junior lawyers as a group are slightly more white than paralegals, but not dramatically so.

Some 29 per cent of paralegals surveyed came from a BAME background, as opposed to 27 per cent of junior lawyers admitted to the roll in 2014-15. 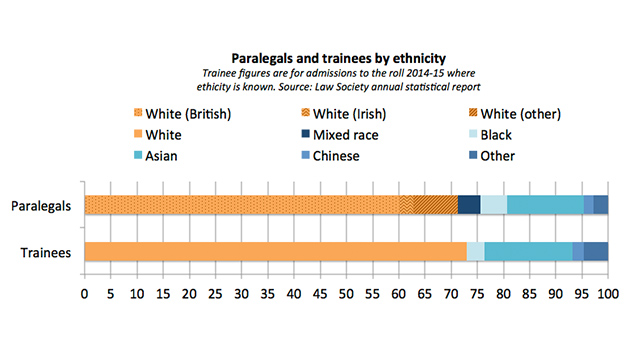 Paralegalling certainly isn’t a nine-to-five job. According to the Office for National Statistics, full-time workers in the UK average around 39.1 paid hours per week. Overall, our survey reveals that the typical paralegal in the UK works an average of 42. London-based paralegals work slightly longer on average – 43.5 hours – with those at the magic circle clocking up an average 46 hours.

Many respondents to the survey complained specifically about “long hours and low pay” that the job can bring, and the vast majority (73 per cent) agreed they work just as long hours as the qualified lawyers at their firm. However, even though they’re paid less, only 55 per cent feel that “too much is expected of paralegals when it comes to working hours” – suggesting that many accept working as hard as lawyers as part of the job.
Paralegal hours satisfaction

But are their days filled with dogsbody work – filing and making tea? Or are they working on meaty legal matters?

The results show that paralegals are mainly used as trainees in all but name. On a day-to-day basis, half of all paralegals surveyed said the work they are asked to do is essentially the same of that of a trainee. Only about 14 per cent said their work is typically lower than trainee-level, while one in five paralegals say their day is spent on tasks above what a trainee world be given. Just 4 per cent of all paralegals say that they have “never” done trainee-type work.

However, the wide spread of jobs that paralegals are used for is made obvious. Some 60 per cent of all those surveyed said they had been given work that a two-year-qualified lawyer would do “at least once” while 15 per cent said they did that kind of work “all the time.” But equally, only 14 per cent of paralegals said they had never been asked to do non-legal dogsbody work such as filing or running errands. 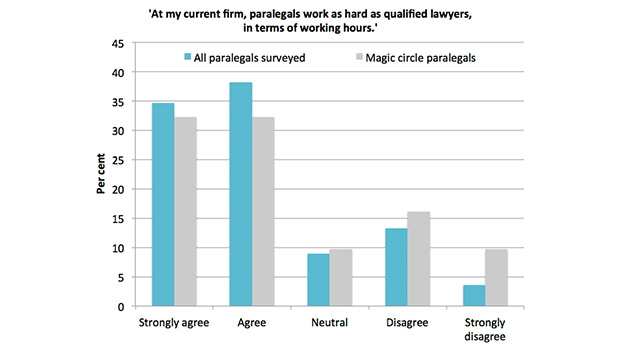 Worryingly for the profession, a substantial minority (14 per cent) of paralegals feel that their work is not properly checked and supervised by qualified lawyers. It appears this is not a problem confined to one region or type of firm: paralegals dissatisfied with their supervision came from a complete mix of firms, from the magic circle to the high street and everywhere in between. 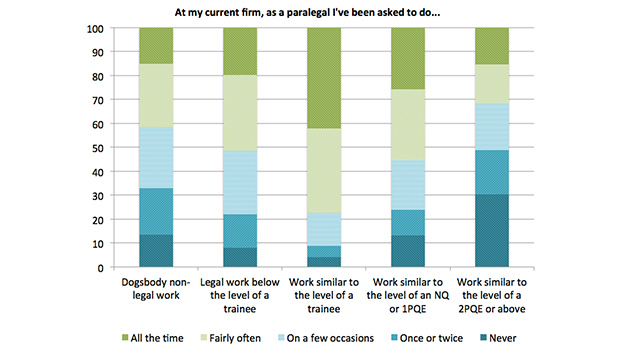 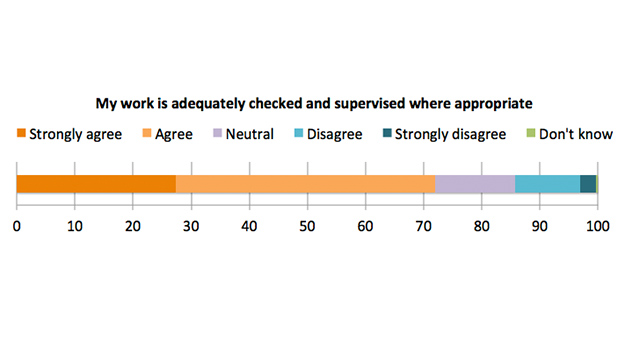 What’s been your best experience as a paralegal?

The majority of paralegals are unhappy with their salary, with only one in three (36 per cent) agreeing that they are fairly paid. Numerous paralegals complained that the most demoralising thing about their job was “not earning as much as the qualified solicitor sat next to me doing the same work.”

Getting down to brass tacks, if you’re a full-time paralegal in London with under a year of experience, the chances are you’ll be earning between £20,000 and £30,000 – not anything that’s going to make you rich but certainly a living wage in the capital. Outside London, the norm for a paralegal of the same level is between £15,000 and £20,000, with a few high-paying firms handing out a bit more.

Across all the paralegals who responded to our survey, 4 per cent earned more than £40,000. Who were these people? Some worked at US firms, some were in-house at (often American) companies, while others were at UK firms but had been working as a paralegal for five years or more. 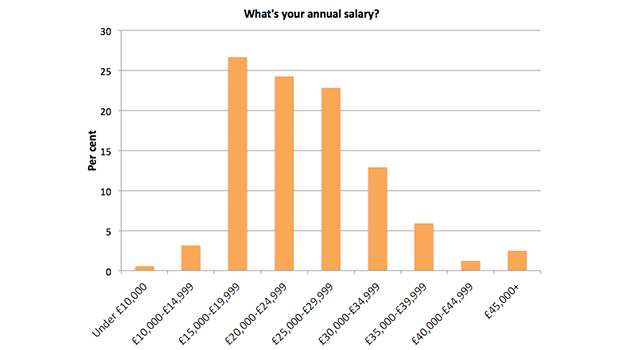 What’s been your worst experience as a paralegal?

It’s been accepted wisdom that paralegals are more qualified than ever before, as firms tap into the huge pool of unemployed LPC graduates for cheap talent. However, no research has ever been done into exactly how qualified paralegals are.

Lawyer 2B can now answer that question. The vast majority of paralegals now have a degree – 86 per cent. However, despite many job listings asking for a Legal Practice Course (LPC) qualification, only half of survey respondents had completed this course, with a further 5 per cent having done the Bar Professional Training Course (BPTC). London-based paralegals tend to be slightly more qualified. In the capital, nearly 90 per cent have a degree, 53 per cent have passed the LPC and 9 per cent have taken the BPTC. 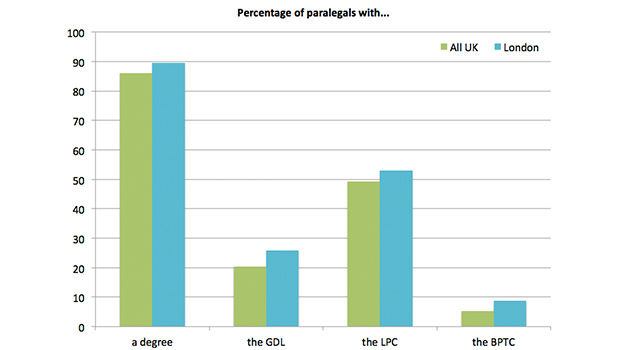 perception that the majority of paralegals are training contract hopefuls. This is broadly true. Of the respondents to our survey, 43 per cent are currently looking for a training contract, with another 4 per cent seeking pupillage.

Furthermore, about one in every five paralegals (22 per cent) has a training contract lined up and is filling in time before starting it.

Some 10 per cent of paralegals want to become a chartered legal executive. Interestingly, a similar amount are interested in pursuing the new alternative routes into the solicitors’ profession, such as the equivalent means ‘paralegal short-cut’ or via an apprenticeship.

Just two per cent of those surveyed had no ambitions at all to become a lawyer, while 8 per cent had given up on that dream. 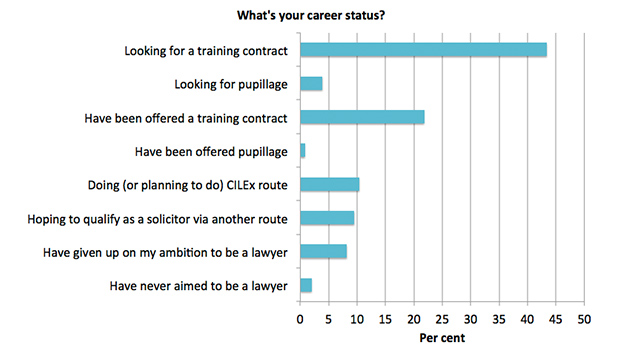 While this problem definitely exists, it appears that it is not the norm. Of paralegals working at firms with training schemes, 38 per cent agreed that the firm “deliberately dangles the carrot of training contracts in an attempt to make paralegals work harder”. However, 51 per cent disagreed (a further 11 per cent weren’t sure).
Paralegal TC

Paralegals were less favourable views on the recruitment process, however. Only one-third of paralegals think that process in which their firm recruits its own paralegals onto training contracts is ‘fair and transparent’, with nearly half saying that it isn’t.

“There is no consistency,” complains a source at a top 50 firm. “HR make the decisions and they do what they want to do based upon who their favourites are that year. Several training contracts have been offered via the back door to people who haven’t even bothered to apply.” 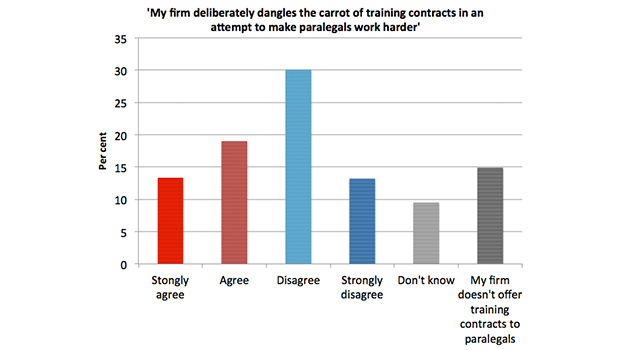 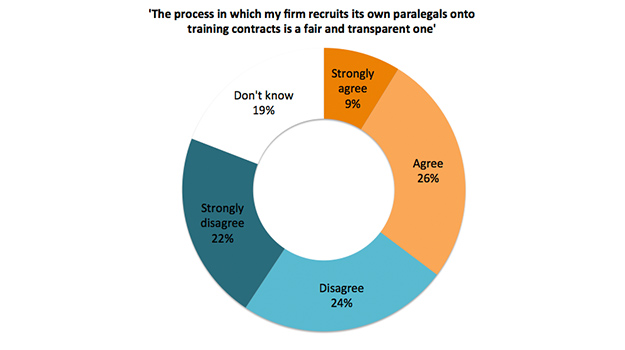 We asked the question: ‘While working as a paralegal, has a senior member of a law firm has requested sexual favours in exchange for a training contract?’

We did not expect this to be a widespread issue, and we were right; however, it was not completely unheard of. Just under 2 per cent of those surveyed had experienced this kind of harassment, with a further 5 per cent personally knowing someone who had experienced it.

Among those people who gave details of their experience, comments included:

Paralegalling as a career path?

Some firms are realising that they now have so many paralegals, creating some kind of career structure for them is in order.

“We have gone from literally no paralegals to employing a significant number,” Trowers & Hamlins’ director of HR Paul Robinson told Lawyer 2B last year. “Five years we didn’t have any; we now have nearly 50 in the UK.” As a result, in 2015 the firm decided to ringfence two training contracts a year for members of its own paralegal pool, and introduced a wider paralegal career structure for those with other aspirations. It mirrors the structure of other fee-earners with different levels and comensurate salary bands taking into account their entry point: school leaver, A levels, university degree, LPC-qualified and beyond.

“For career paralegals – that is, those who don’t aspire to become a solicitor – the structure gives them a framework where they can see what career with us they can have,” says Robinson. “These are good people who are really contributing and it is important for them to be able to see where their career could go, and we’ll support them with their study through CILEx if they so desire.”

Other firms are also thinking about paralegal career structures, but our survey shows there’s a long way to go. Some 61 per cent of paralegals we surveyed disagreed that, when you discount training contracts, there is scope for good career progression for paralegals at their firm. Less than a quarter agreed that they “know what would be required to progress as a career paralegal,” and what they might achieve in terms of title and salary.”

Most tellingly of all, only 9 per cent of all those surveyed agreed that being a career paralegal would be an attractive prospect with over half ‘strongly disagreeing’ that it might be a good path to go down. 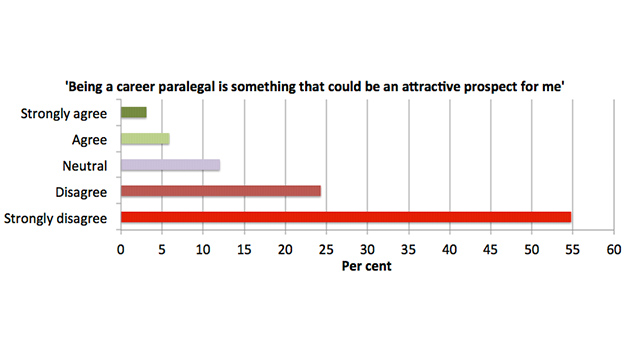 These are worrying figures. In the future, firms will still need qualified lawyers, but they are also likely to need large armies of non or semi-qualified fee earners. The fact is that paralegal-type roles are going to figure increasingly prominently in the legal profession. Law graduates need to start seeing these sort of jobs as an attractive career option – and that won’t happen until firms think seriously about how to make them so.

Ultimately, is being a paralegal heaven or hell? As with so much in life, the answer lies somewhere in between.

We certainly received a lot of complaints and negative comments from our survey respondents – but despite this, when we asked paralegals whether, overall, their experience has been a positive one, the answer was a resounding ‘yes.’Paralegal overall experience

What’s more, 85 per cent of paralegals who are still searching for a training contract or pupillage feel that their time paralegalling will help them secure one. 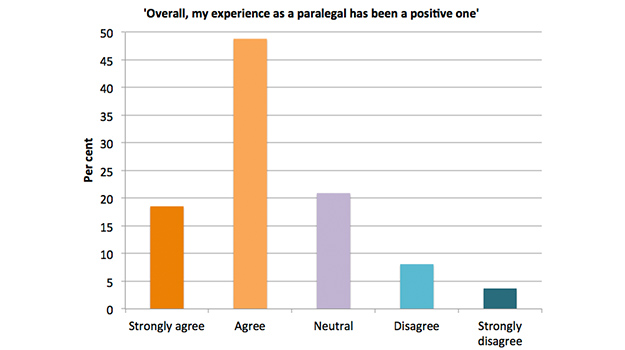 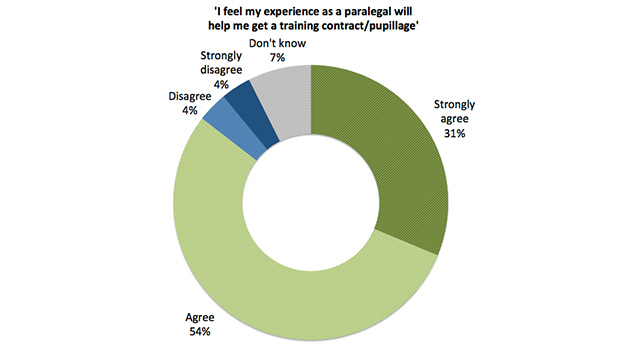 We also asked if paralegals felt valued by their firm. Here, the response was more split. Around half those we surveyed said, yes, they did feel valued, while 28 per cent said no and 21 per cent were neutral. 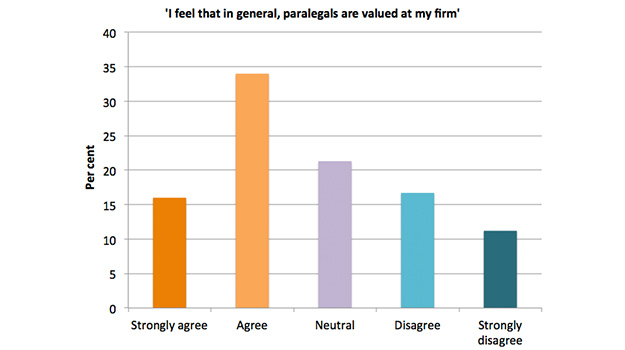 A paralegal at a national firm summed up the mood of many: “Being a paralegal is a great way for law graduates to develop their CV, but actual job fulfilment really depends on the firm and team you are working for. I will use my current experience as much as I can to aid me in getting a training contract but my firm needs to do a lot more to make paralegals feel valued.”